Remember the Defend Errinundra campaign in 2021, which saw over 15 arrests and stopped logging for 5 months? Well, nearly 9000 ha (or over 4000 MCG’s worth!) of this critical climate refuge has now been put into Special Protection Zones, preventing logging. This is a huge win for the hundreds of people that mobilised to protect this unburnt refuge. 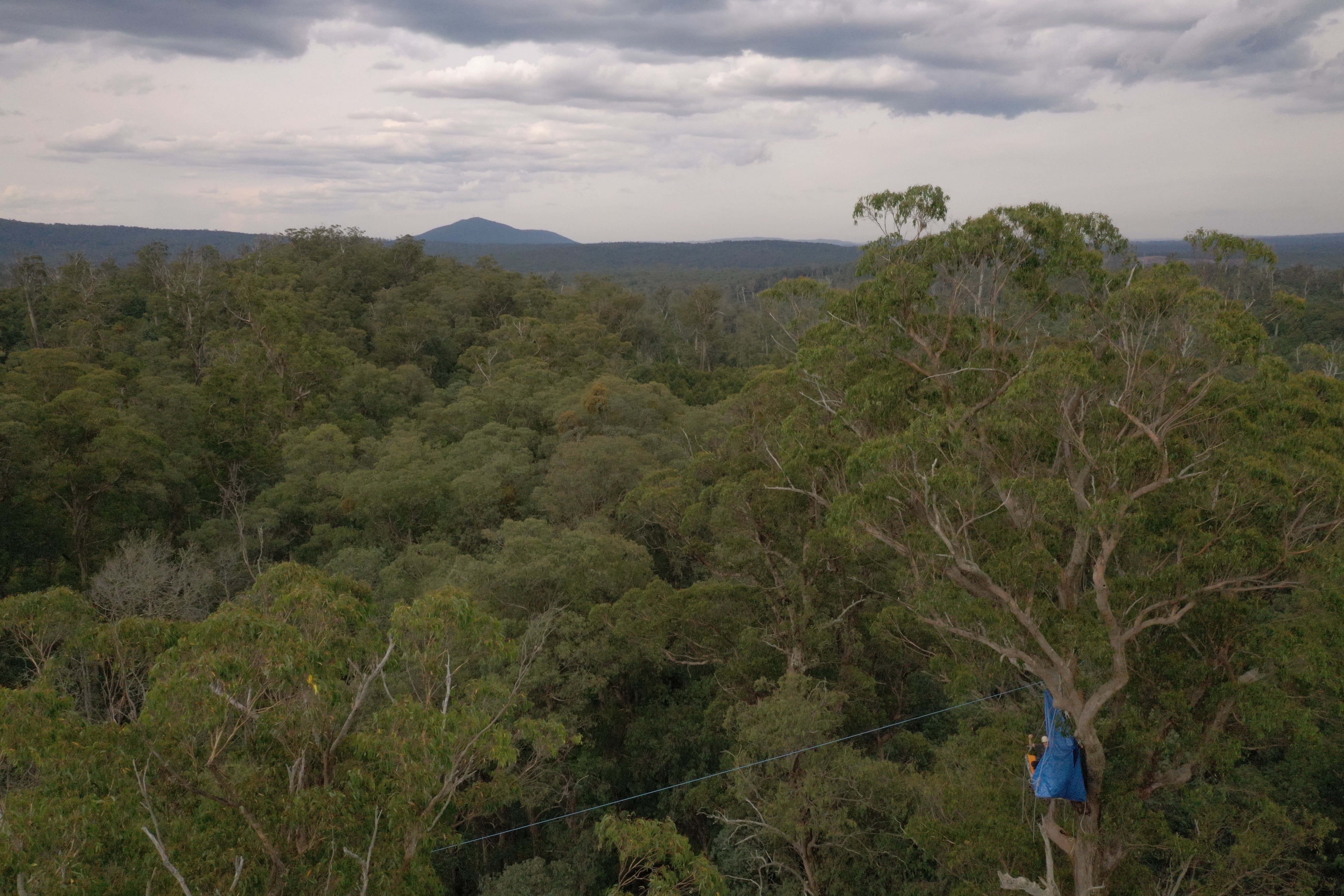 How did the protections come about?

The re-zoning of this area was the outcome of the Threatened Species and Communities Risk Assessment (TSCRA), a process led by the Department of Environment, Land, Water and Planning (DELWP). The risk assessment was designed to evaluate the impacts of forestry after the Black Summer bushfires on threatened species listed under Victoria’s Flora and Fauna Guarantee Act 1988 (FFG Act) and the Commonwealth's Environment Protection and Biodiversity Conservation Act 1999 (EPBC Act). DELWP were obliged to undertake this process as a result of community environment groups pushing for the inclusion of this clause within Regional Forest Agreements (RFA) after it became clear that the state government was intent on rolling over the disastrous RFAs straight after Black Summer. RFAs are federal and state agreements that govern logging. 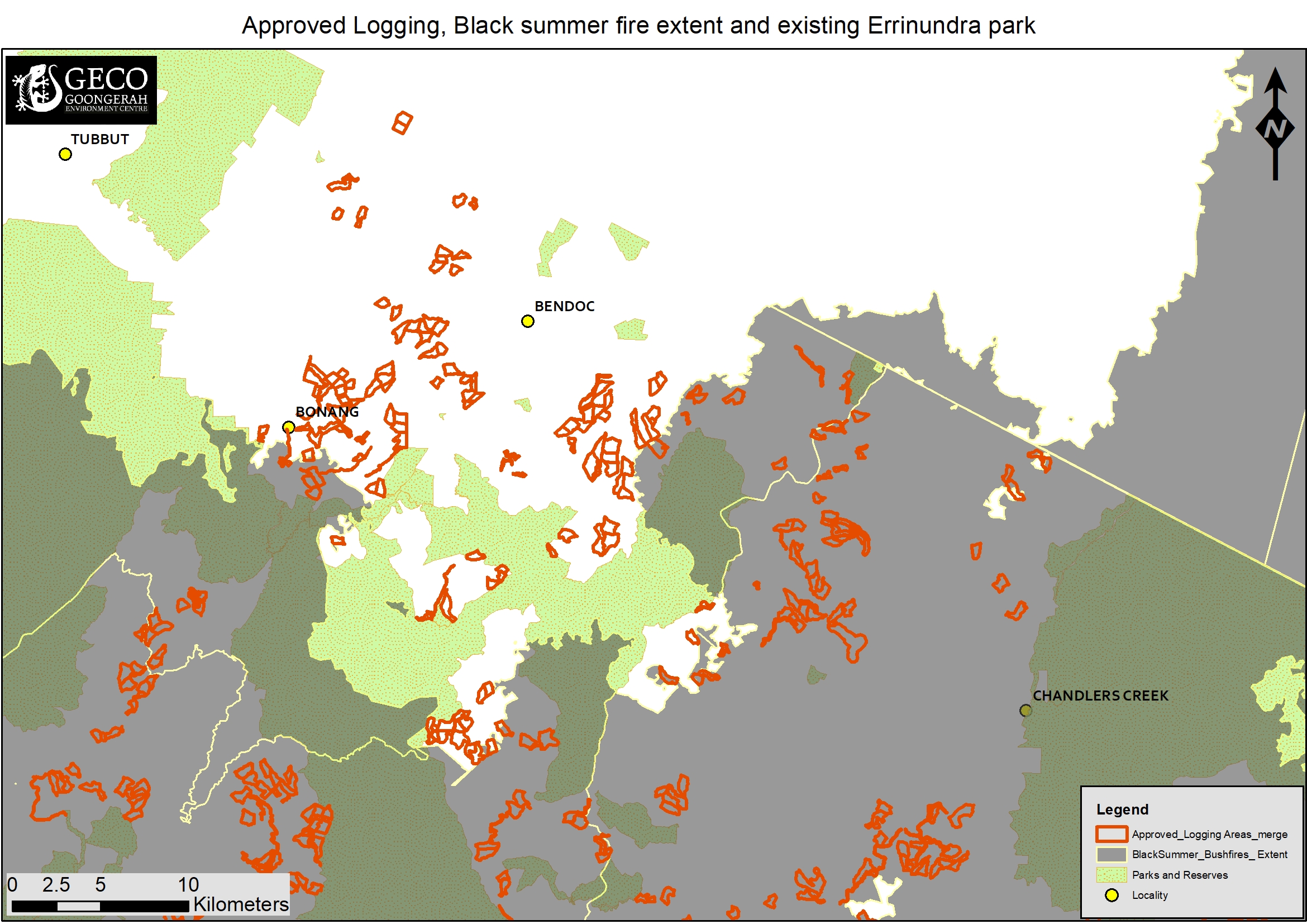 While interim protections were applied in 2021, logging continued in many areas, including in Greater Glider habitat and Old Growth forest. Critical unburnt refuges were still on the chopping block, which is why GECO created the ‘Defend Errinundra’ campaign. The hundreds of people who took a stand for these forests through the Defend Errinundra campaign, and the critical legal action of Environment East Gippsland, gave these areas a temporary reprieve and created long-lasting political pressure to have them eventually protected. Nearly 3 years after the Black Summer fires - they have now been recognised for the crucial values they contain.

29 new Special Protection Zones (SPZ) covering 8740 ha have now been created north of the Errinundra National Park (see pink areas on the map below), covering several important areas which were to be logged (light green on the map). These are areas our campaign over the last couple of years has focused on, as this is one of the last remaining unburnt old-growth refuges in East Gippsland. 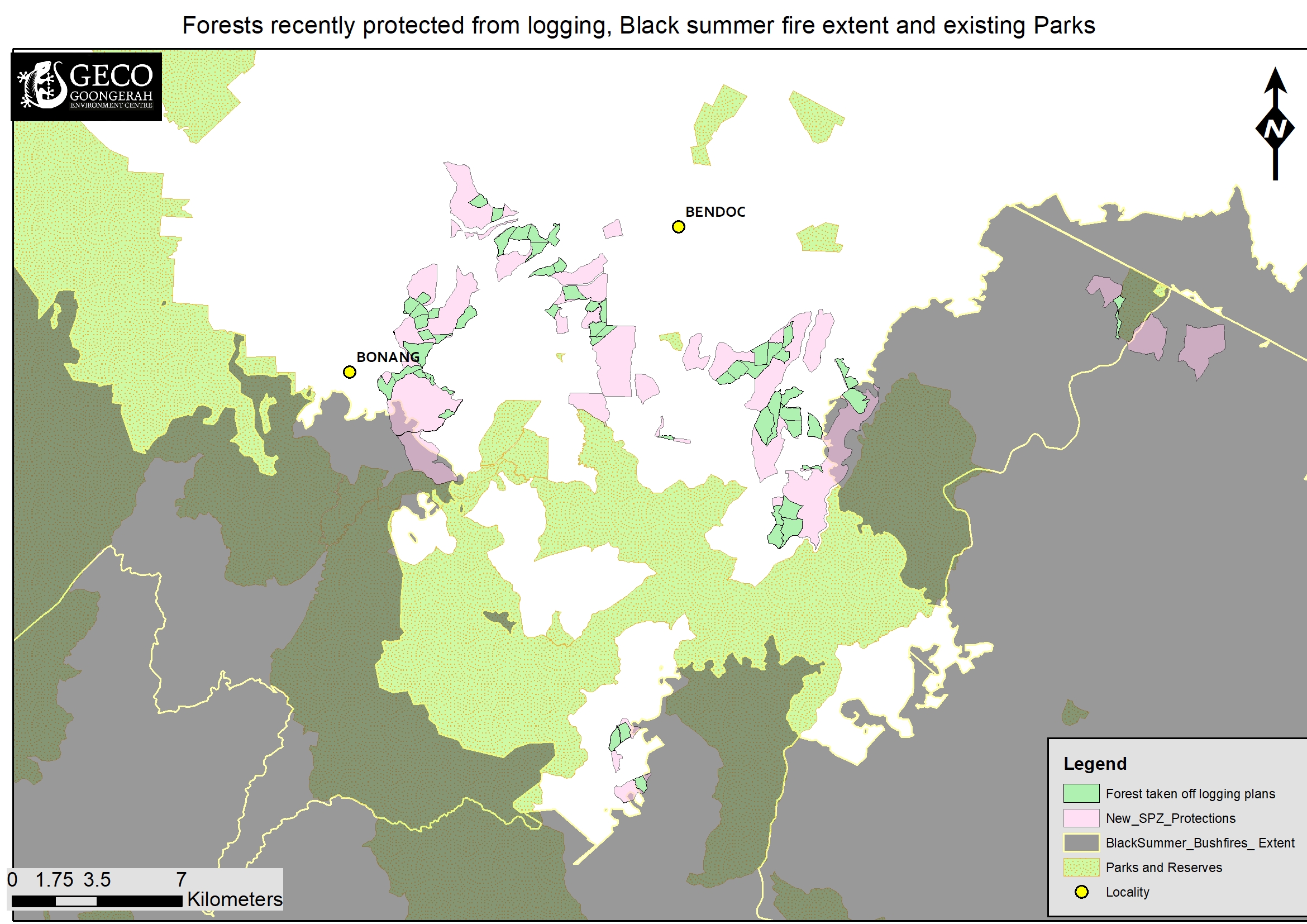 19 new Special Management Zones, covering 6531 ha (yellow on the map below), have also been created in recognition of the area's outstanding natural values, BUT these areas still allow logging - so their function as a refuge becomes compromised because of this. 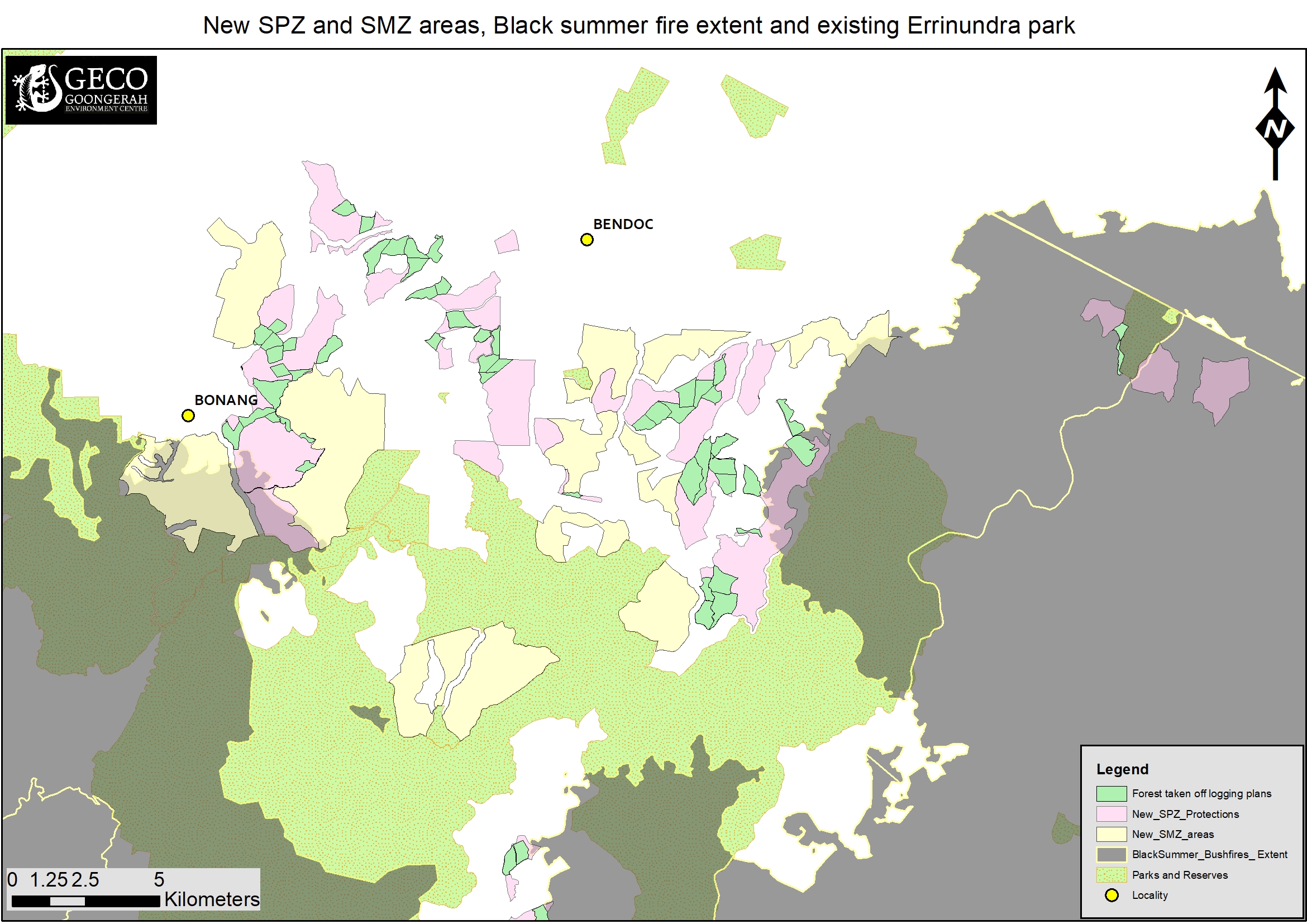 While many special areas of the Errinundra Plateau now have the protection they deserve, many other areas missed out and are still threatened by logging (see coupes outlined in orange below). 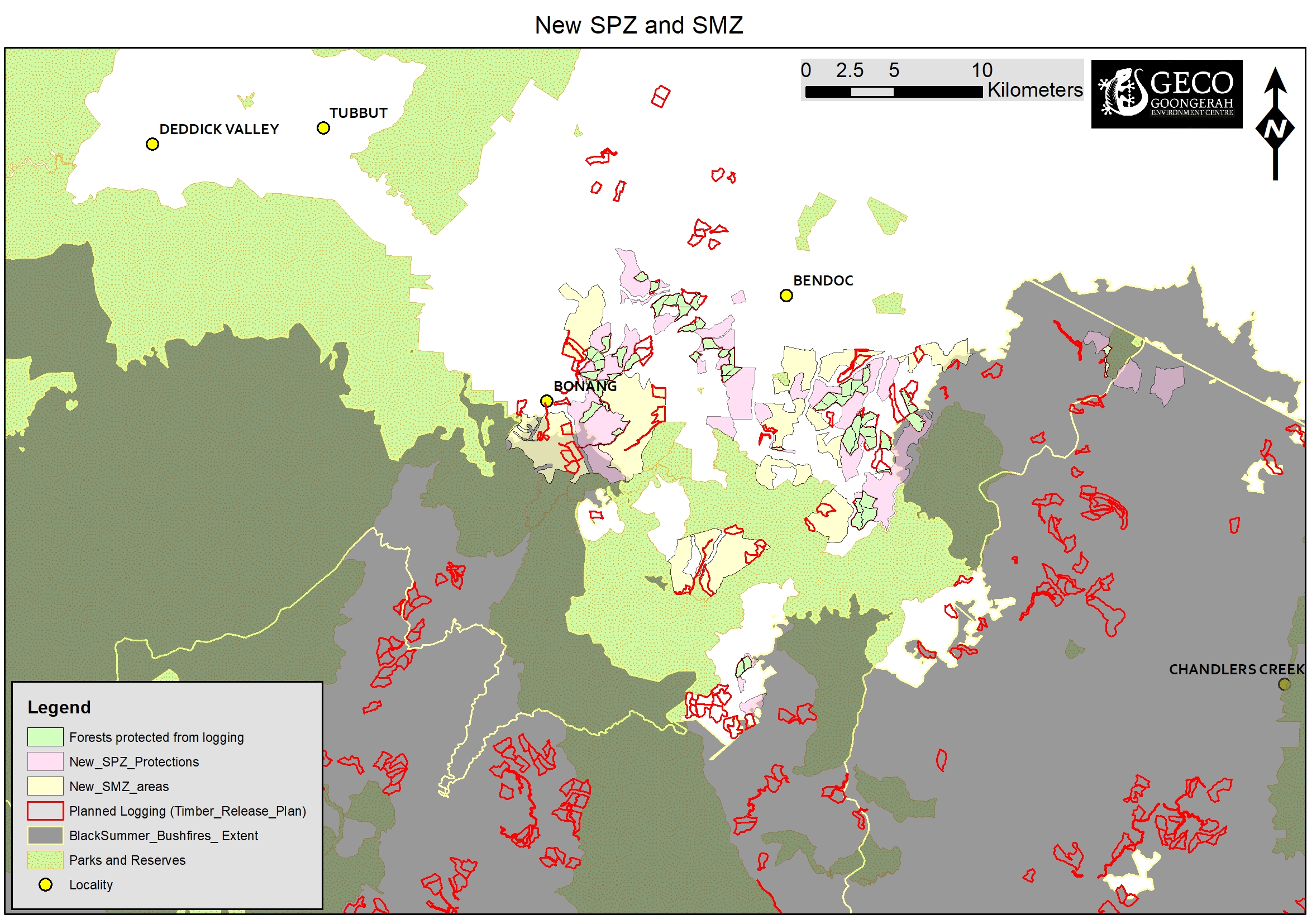 We only have to look at the extent of proposed Old Growth logging across the region (in red on the map below), 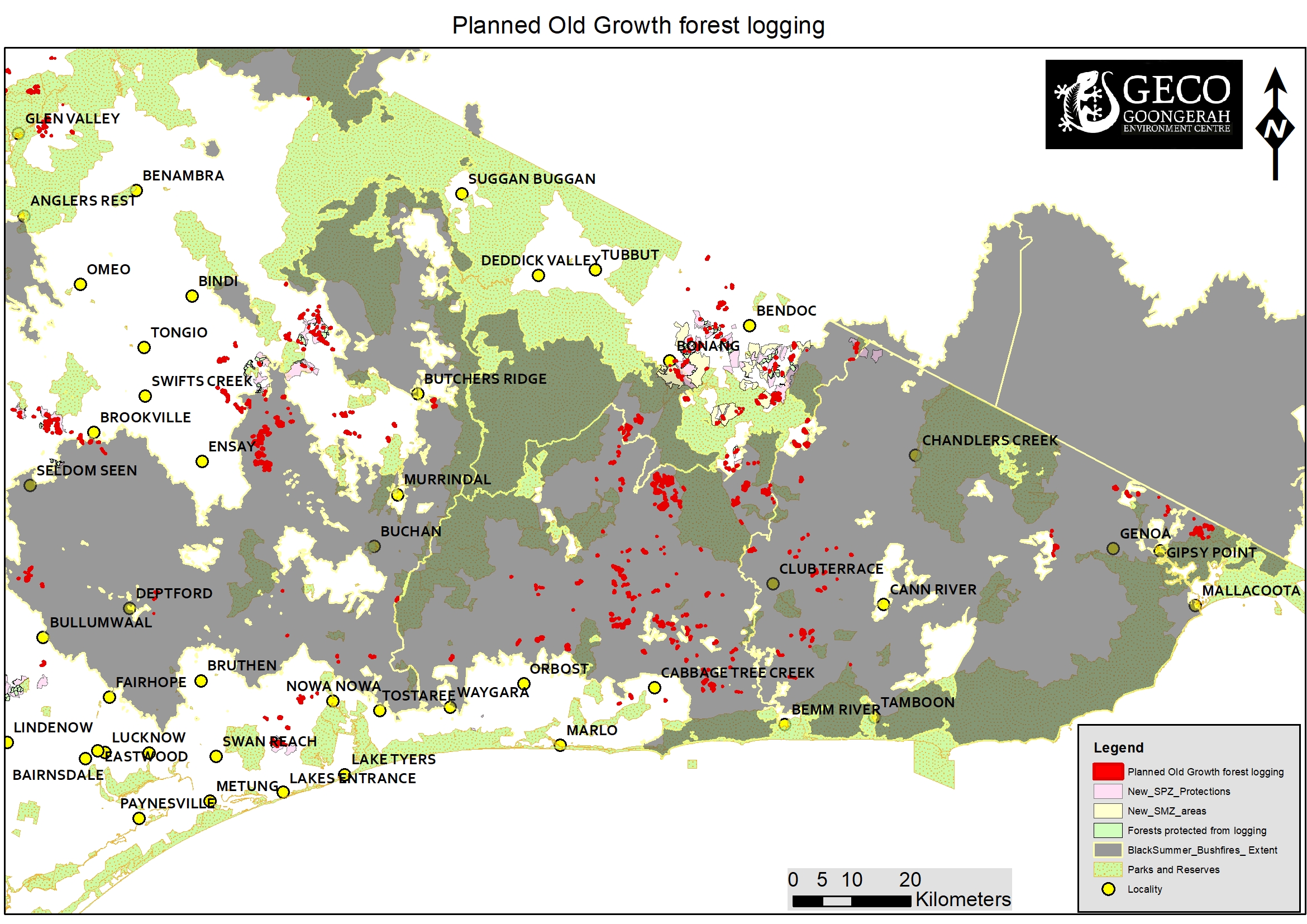 or the extent of total logging already approved to take place (black on the map below). it's clear our job is far from over! That's why these forests still need your ongoing support. 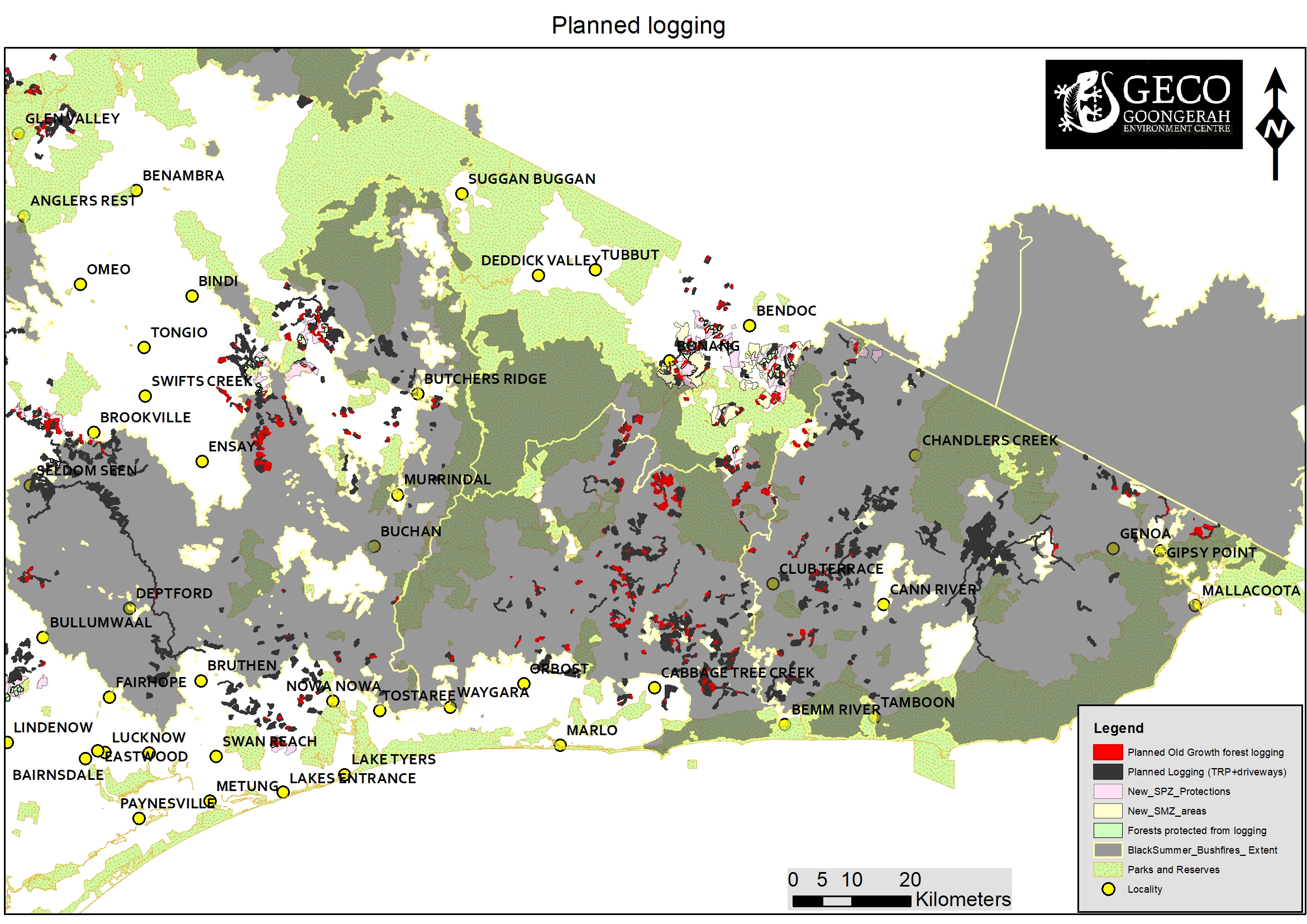 The Defend Errinundra campaign was significant, especially for the local community of Goongerah. After having the fire just come through their homes, residents were outraged at the government's blind approach to logging this precious unburnt refuge. The video below documents their efforts in this campaign.

Environment East Gippsland inc vs VicForests court case was the final piece that kicked them out of this forest. The premise of the injunctions applied in May 2021 was that:

“VicForests has failed to apply management actions (protections) in respect of greater gliders and yellow-bellied gliders and unless restrained will continue to do so.“

They argued that VicForests has not adhered to its legal obligations in the Code of Forest Practice (2014) or the Management Standards and Procedures (2014) or the Planning Standards (2014), in particular its obligations relating to the precautionary principle, where decisions must be guided by careful evaluation to avoid, wherever practicable, serious or irreversible damage to the environment. If this possibility exists, the “benefit of the doubt” is given to environmental protection.

The importance of this particular unburnt refuge

The wet forests of Errinundra have provided a refuge for species for tens of thousands of years. During the last ice age, plants and animals retreated to and around the Plateau where they remained protected from icy conditions until the continent began to warm. The Plateau’s cold and wet climate has suppressed and resisted bushfires more so than the lowland eucalypt forests - Black Summer stopped at the plateau. Fire-sensitive communities, like rainforests, thrive here because of this.

The plateau is situated in a geographically special spot, dropping off the south of the Monaro tablelands, is subject to extra rain from east coast currents, and has a cloud forest altitude of more than 1000m. All these factors combine to produce spectacularly large trees, but it's not just the big trees that are special, there are small gnarly mountain plum pines that are thought to be well over 1000 years old! Cool temperate rainforests like those found on the plateau represent those forests that covered Australia in Gondwanan times.

The plateau may well be one of the last strongholds for some species in a warming climate, according to research - it may be the final refuge where species like the Greater Glider can survive by providing a cooler higher elevation home. 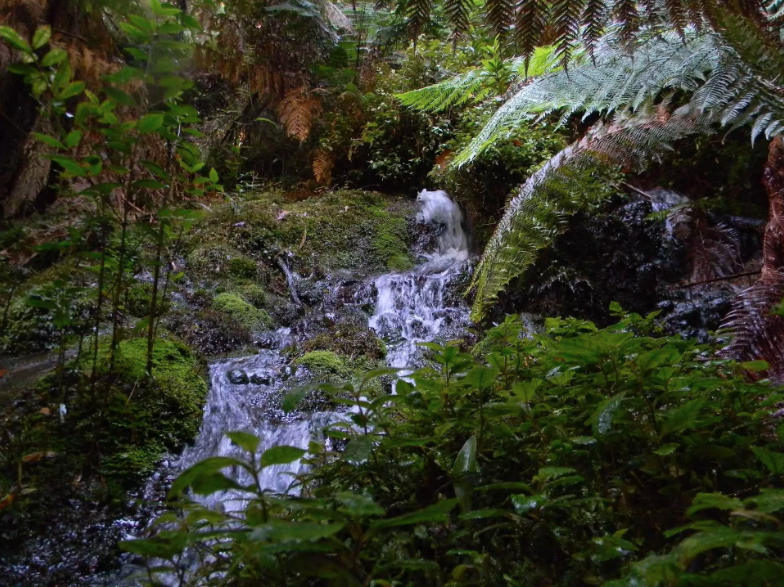 The fires ripped through 81% of forests in East Gippsland. With logging destroying the only remaining home some threatened species may have and increasing future fire risk, the protections applied to this area are hugely important.

More work to be done.

Despite local media and industry backlash about the success of recent court cases, like Environment East Gippsland's, to prevent illegal logging, there is still a great deal of logging occurring across the state. We know since the bushfires, there is nowhere where they can log which doesn't impact threatened species, fire-recovering forests, Old Growth forests, or other universal values like carbon and water. Still allowing logging in persistent pockets around the plateau, or anywhere for that matter, produces edge effects. This means if a fire were to strike again, it would have convenient little inroads to burning forests that have never seen fire before, like the Errinundra Plateau. The demand to end logging now has never been more urgent.

Other unburnt refuges were offered protections as well, although a significant carve out of the areas had astonishingly already been logged. This was in Swifts Creek, Nunniong and the Colquhoun forest in East Gippsland, as well as in Mansfield and Baw Baw in the Central Highlands. Threatened species need real action, not spin. All unburnt areas should be considered of high conservation value and the remaining forest immediately and permanently protected.

Finally and most importantly, while Special Protection Zones are a step in the right direction, they are not permanent. These areas, as well as Special Management Zones, need permanent and ongoing protection.

We will continue to fight for these outcomes, while also taking time to celebrate the wins as we go along. Keep your eyes peeled for a celebration camp early next year up at the Errinundra Plateau - where we can also take action for the remaining forests. 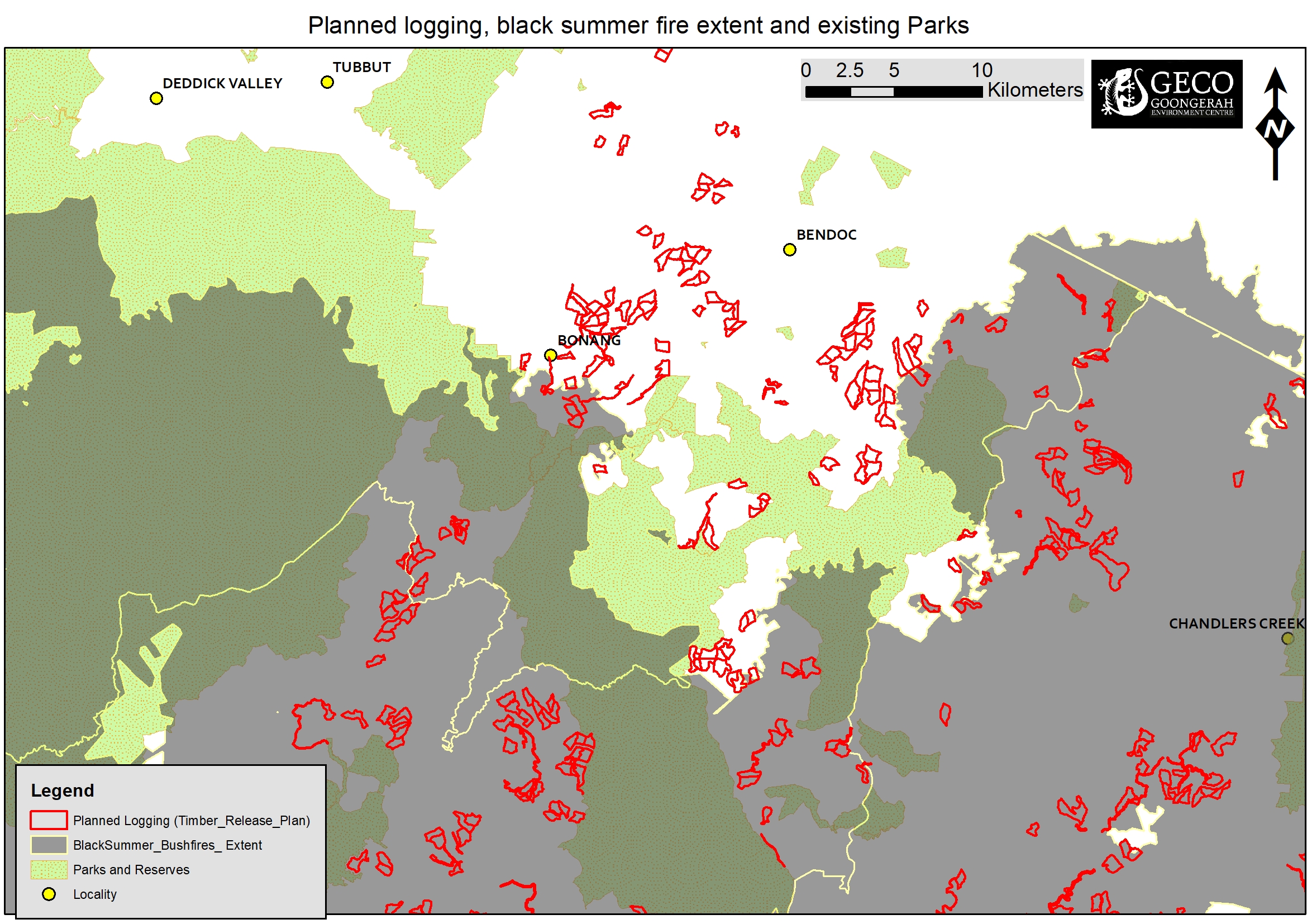 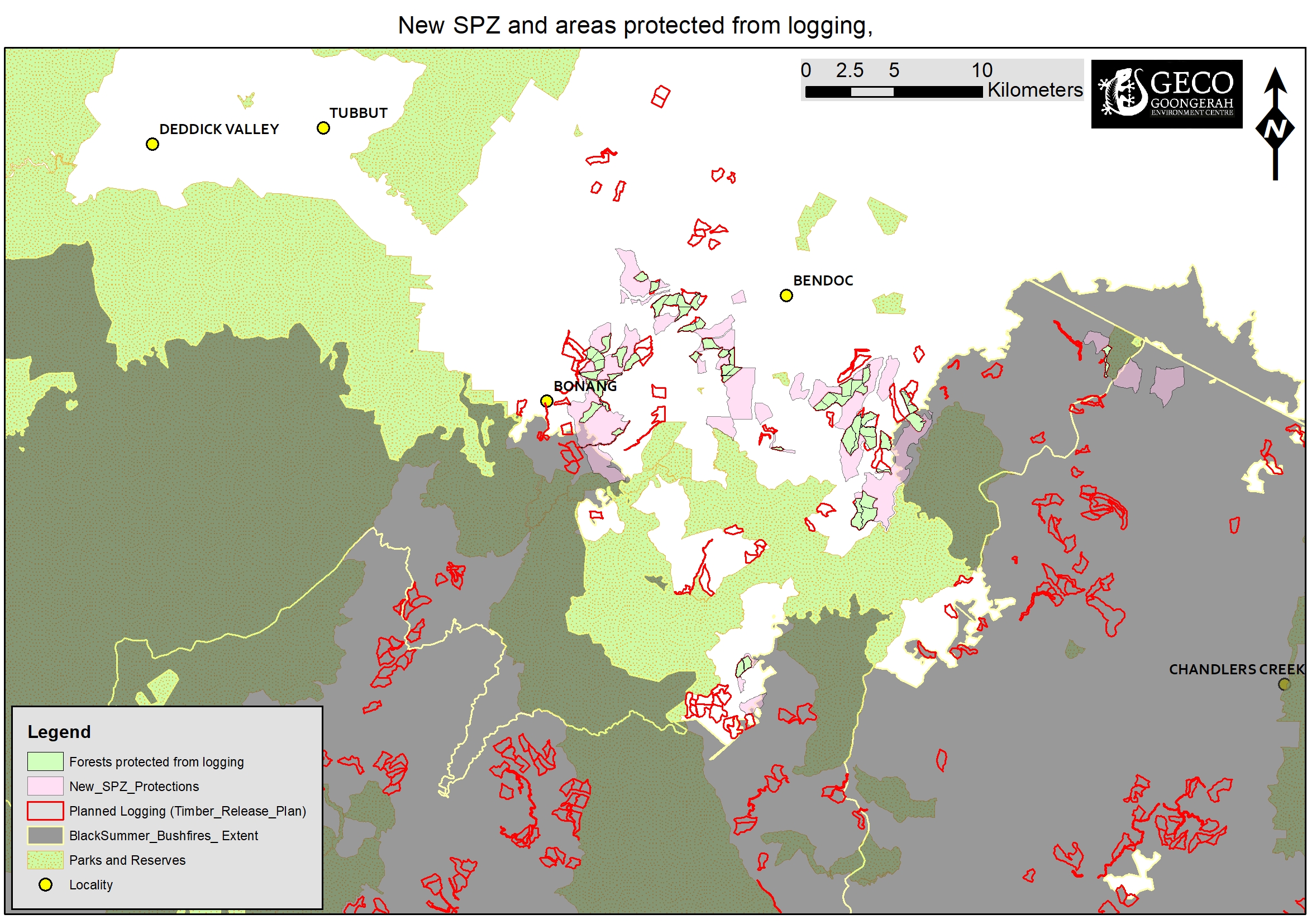 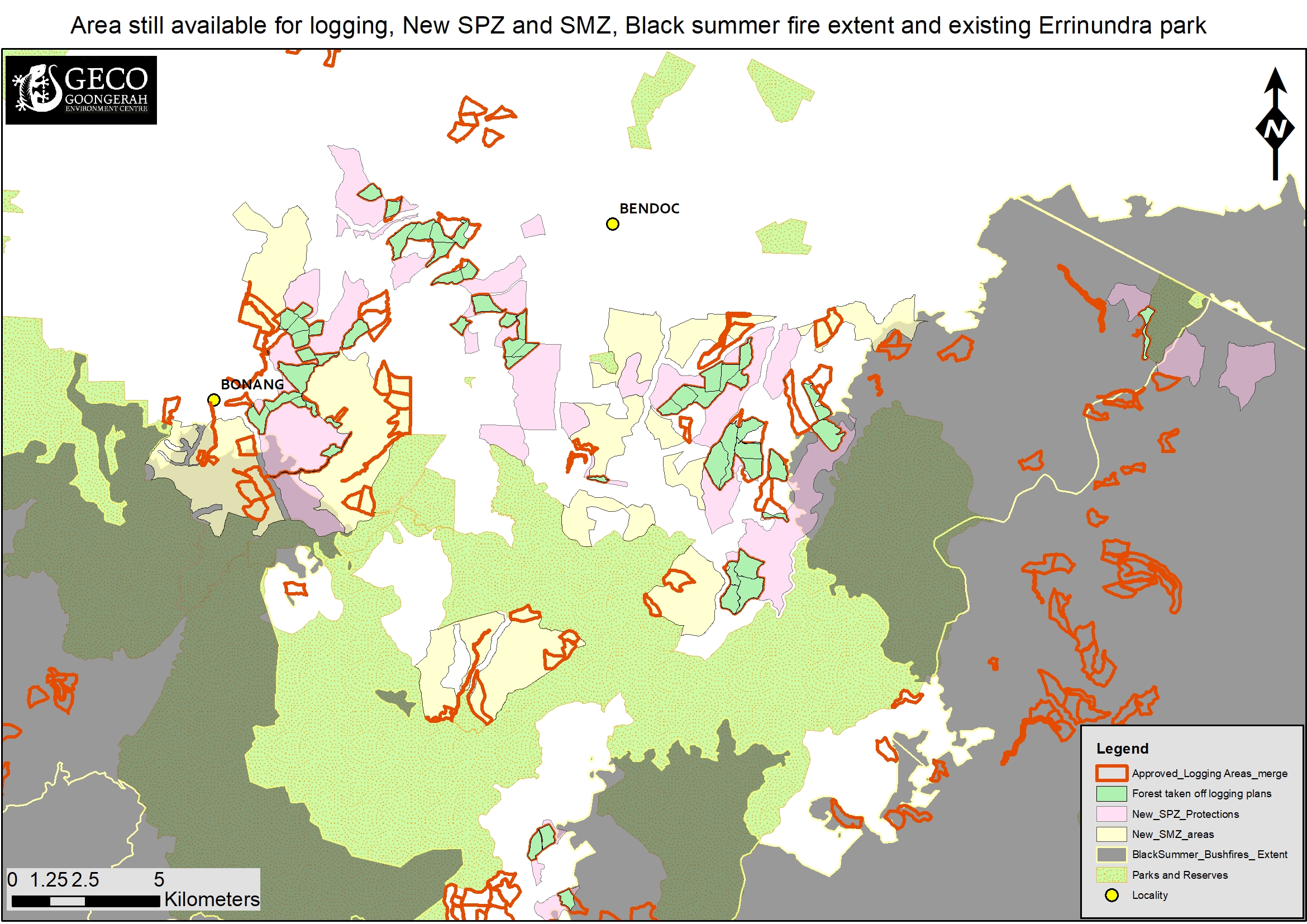 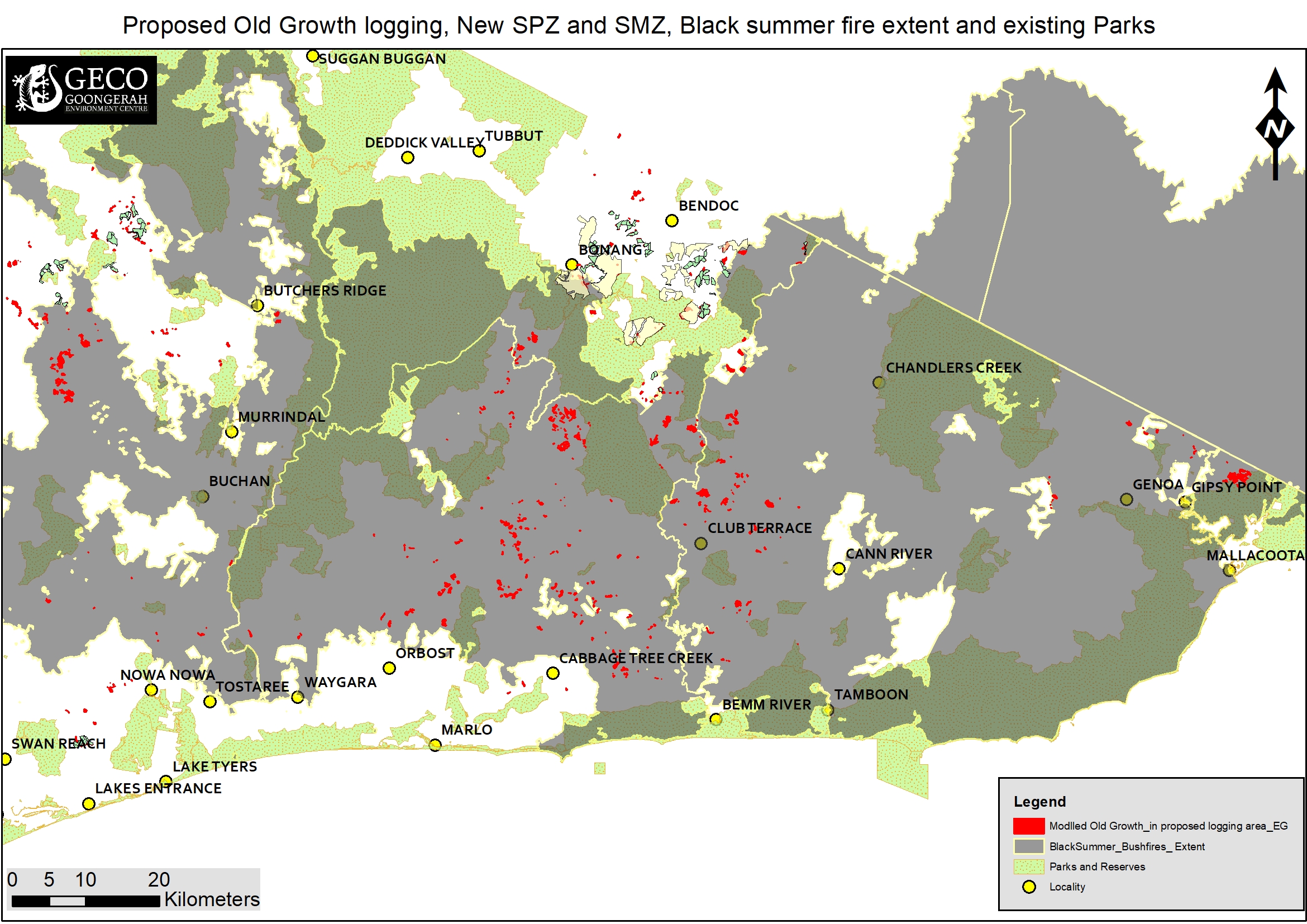 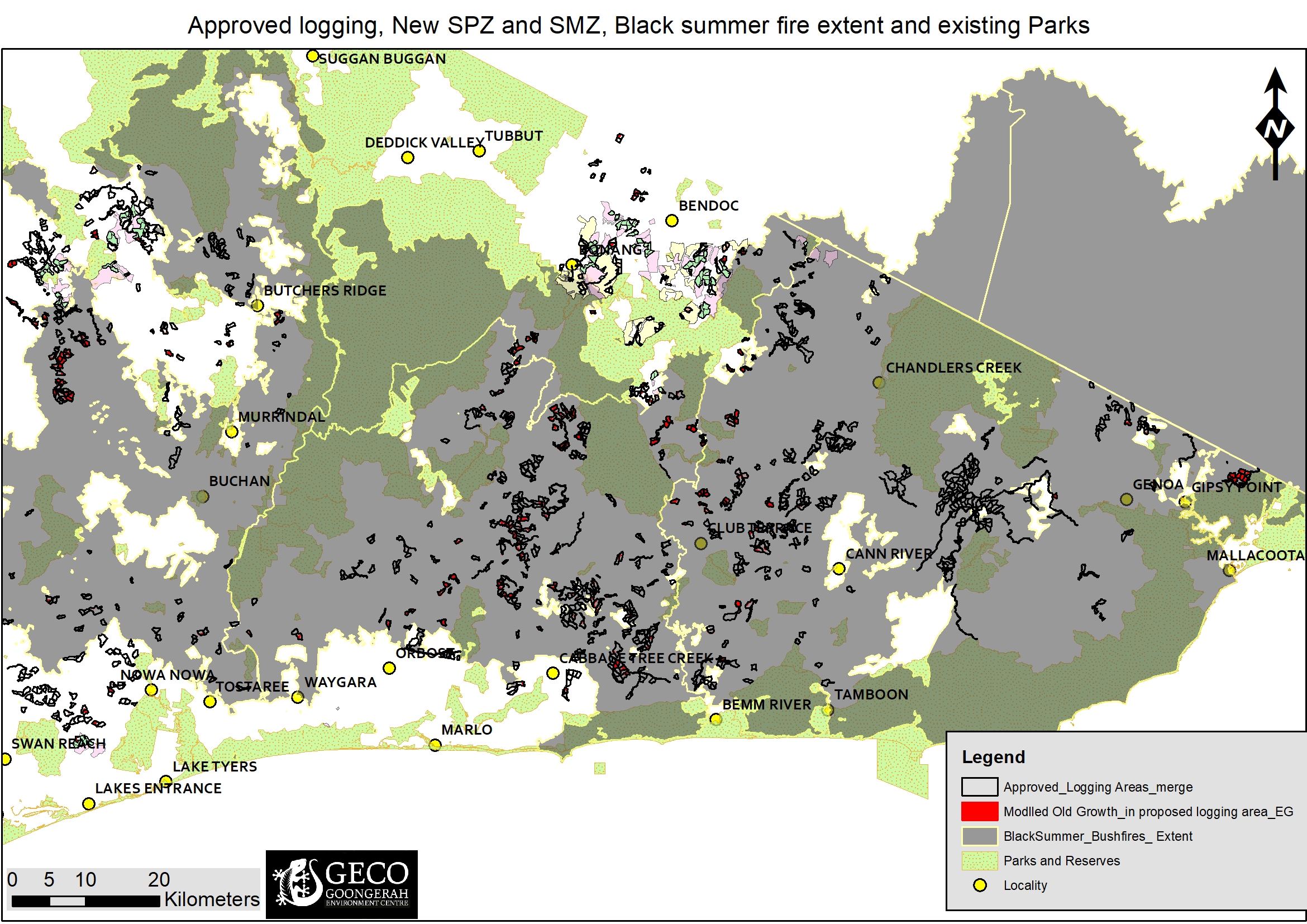 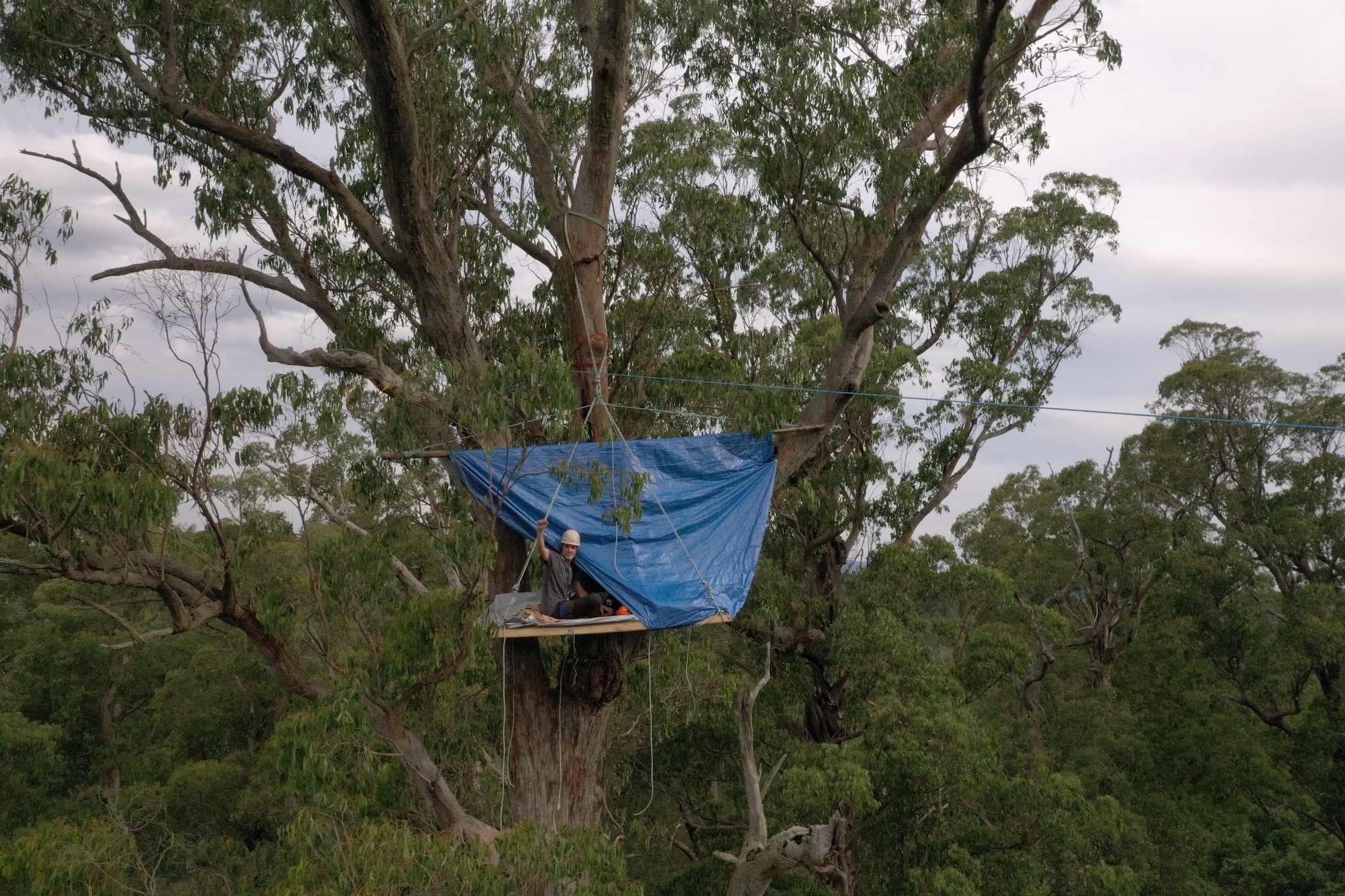