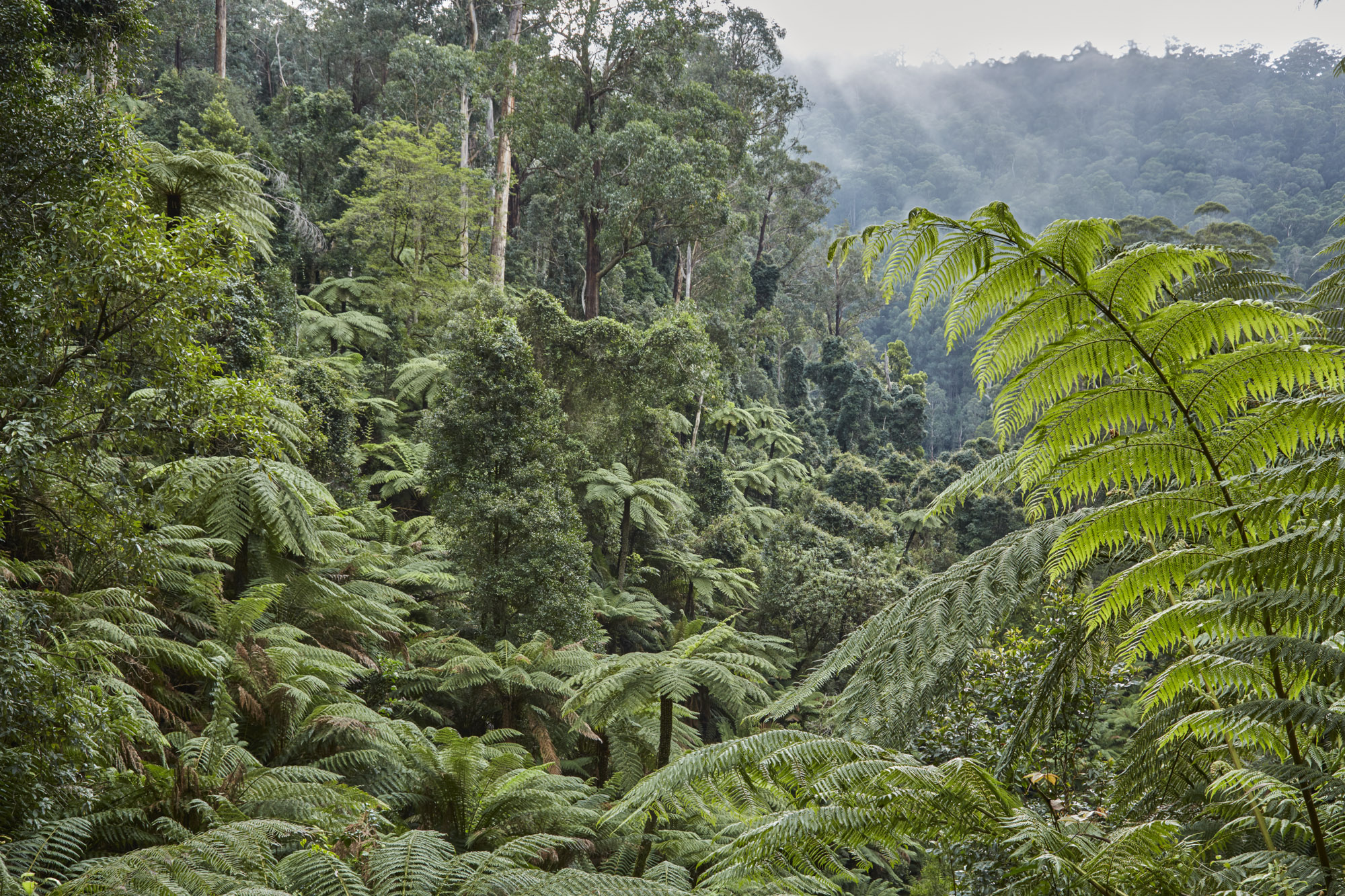 Our citizen science program has made a really exciting discovery! Earlier this year we conducted an intensive rainforest survey of an area of rainforest in Kuark and identified a species that has never been recorded in East Gippsland. We sent the fern to the Melbourne Herbarium and they confirmed it as Bristly Shield Fern (Lastriopsis hispida). The closest known occurrence of this species is 250kms to the west of Kuark forest. It' s a highly significant discovery and a huge geographical range extension for the species. It shows that we don't know what species we could be losing when VicForests log these areas without doing adequate pre-logging surveys for special values and threatened species.

ABC's AM program came out to the Kuark forest with us and reported on this unique discovery. Click read more to see the media stories. 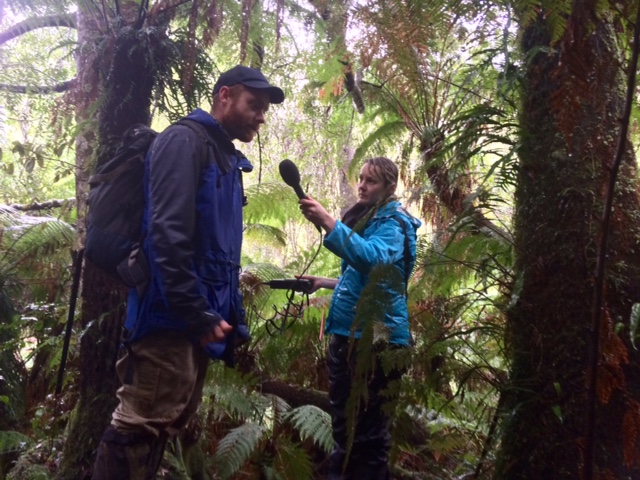 We've submitted a detailed report to the government on the rainforest survey we conducted and the presence of this rare fern in the proposed logging area. We're calling on them to cancel planned logging operations in the Kuark forest and protect Kuark's biodiversity and rainforests.

Rare ferns and rainforest species have been discovered in a part of the Eastern Victoria region that is earmarked for logging, according to an environment group.

The Goongerah Environment Centre (GECO) has been running citizen science camps to map the biodiversity of the remote Kuark Forest, outside of Orbost in East Gippsland.

In an unreleased report given exclusively to the ABC, GECO said it had made a number of significant finds.

GECO spokesman Ed Hill said he and a group of volunteers who surveyed the Kuark forest in April found a bristly shield fern, which has never been documented in East Gippsland before.

"We took a sample and sent it to the herbarium in Melbourne and they verified it as the bristly shield fern, and the closest known occurrence of this fern is 250 kilometres to the west of here ... just out of Melbourne in the Bunyip State Forest or to the north, just south of Sydney," he said.

"So it's a huge geographic extension and a really significant discovery."

Melbourne University senior research fellow Dr Craig Nitschke, who is working on an unrelated project that is partly funded by VicForests, said rainforests had particular historical significance in Australia.

"They really are links to our Gondwana past, there are species in there that have been around for a very, very long time," he said.

"In the mainland of Australia, increasingly they have become rarer over the last 10,000 years, mostly due to the impact of fire on the landscape and the warming and drying of the climate.

"They are really relics of the past and there's a lot of species in there too we only find in those ecosystems.

"There's about roughly 175, 180 species that occur in rainforests and about half of them are only found in those ecosystems and some of them are threatened as well."

In Victoria it is illegal to log areas of rainforest, but Mr Hill said many of the rainforest species that volunteers found in the Kuark Forest were within the state-owned VicForests-planned logging coupes.

He said VicForests was not doing enough to identify areas of rainforest within the Kuark Forest.

"There are species out here and amazing rainforest and amazing conservation values that we don't even know about," Mr Hill said.

"The Government doesn't come in and adequately survey these areas before they log, so we just don't know what we are losing."

But VicForests manager Nathan Trushell said that was not the case.

Mr Trushell said the state's forestry management plan identifies the most important areas of rainforest across the whole of East Gippsland and reserves them.

"We've got a scattering of rainforest that occurs in gullies and small patches right across the forest and they are the areas we need to ensure we don't harvest," he said.

"So what we do is have a comprehensive process to identify those areas and to exclude them from harvesting."

Mr Trushell, who had not seen the report by GECO when he spoke to the ABC, said many rainforest species were found throughout the forest, but were not necessarily in areas of rainforest.

"It's only when they come into certain configurations and a minimum size of 0.1 of a hectare do we then identify and exclude those areas," he said.

Mr Trushell said VicForests would consider any information that it was given.

GECO said it planned to send the report to the Victorian Government.

Rare species wiped out before we know about them: citizen scientists on Vic's Kuark Forest


Listen to the radio story here.

MICHAEL BRISSENDEN: It's political activism but not the type that makes headlines on the nightly news.

While protestors were clashing at a number of anti-islamist rallies in cities around the country this weekend, a group of environmental activists in rural Victoria were taking a different approach - attending a weekend science camp and quietly hoping to further their cause.

ELISE KINSELLA: Here in remote forest in the far east of Victoria, a group of volunteers have been searching for rare and threatened species.

In April the group had an important find.

ED HILL: We're looking at the Bristly Shield Fern, or Lastreopsis hispida. We found this fern and to us it looked like something that doesn't actually occur in East Gippsland.

He runs the citizen science camps which seek to map the biodiversity of Kuark Forest, outside of Orbost.

ED HILL: The closest know occurrence of this fern is 250kms to the west of here. So this fern has never been recorded in East Gippsland. The closest records are just out of Melbourne in the Bunyip State Forest or to the north, just south of Sydney.

ELISE KINSELLA: In an unreleased report given exclusively to the ABC, GECO has put together all of its data.

It shows volunteers have found 90 types of rainforest species within the Kuark Forest, including seven rare types of rare fern.

In Victoria, areas of rainforest are protected from logging.

But Ed Hill says his citizen scientists have found rainforest species in coupes the state owned VicForests plans to log.

ED HILL: The logging that's occurring in East Gippsland is actually wiping out a lot of species that we don't even know about yet.

An investigation cleared VicForests of wrongdoing but found its contractors had needlessly destroyed rainforest canopy.


NATHAN TRUSHELL: Many of the species that you find in rainforests are found right throughout the forest. So it's only when they come into certain configurations and a minimum size of 0.1 of an hectare do we then identify and exclude those areas.

ELISE KINSELLA: Nathan Trushell says VicForests will examine any new information it's given.

GECO says it will send its biodiversity report to the State Government and ask to have the bristly shield fern added to a biodiversity index for East Gippsland.