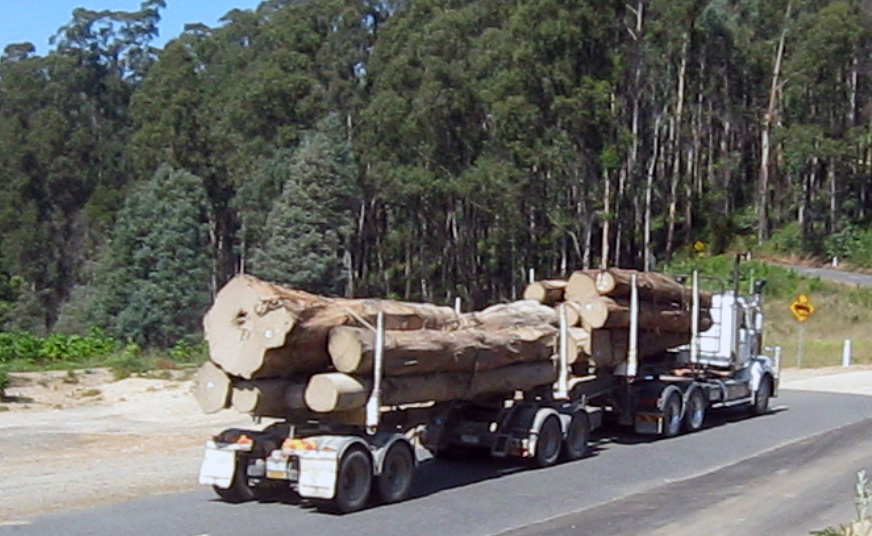 Confidential documents reveal the VicForests has been exporting whole logs to China for rock bottom prices. In the absence of a viable market for so called 'residual' timber, after the collapse of the export woodchip market, VicForests are stopping to new lows here by exporting unprocessed timber and exporting jobs. Our forests are worth so much more standing than they are as unprocessed logs heading to China for rock bottom prices.

The Andrew's government appears to have relaxed restrictions on the the export of unprocessed materiel. It's a move that has angered environmentalists and the Unions. Looks like the rogue agency VicForests has the government wrapped around their finger.

The story broke in The Age newspaper this morning. GECO's Ed Hill spoke with the ABC, explaining that in the language of VicForests, 'residue' actually means whole trees from high conservation value forests. Click read more for media.

What should be done with Victoria’s low grade native timber.... or what’s called residual timber?

Should it be wood-chipped, maybe burnt for electricity, or sold as firewood?

One idea is to ship it to China.

Nathan Trushell is with VicForests, he spoke with Jonathon Kendall on ABC Gippsland this morning.

Mr Trushell told Jonathon Kendall that typically the wood is sold in the $60-$70 per tonne range.

Ed Hill from the Goongerah Environment Centre also had his say. He says the timber shouldn't be treated as residual or a waste product.

Victoria's low grade native timber could soon be packed into shipping containers bound for China and other cut-price countries for processing under a plan to help ailing state timber company VicForests.

VicForests has been left without a market for hundreds of thousands of tonnes of so-called "residual" timber following the loss of a key contract with Japanese-owned wood-chip company South East Fibre Exports (SEFE).

In response, a rule requiring local processing before export has now been relaxed in a bid to open up new markets for the struggling state-owned wood business.

A confidential November 2013 Department of Treasury and Finance (DTF) briefing seen by The Age confirms the industry has for months been lobbying to relax the requirement for domestic processing of timber.

"VicForests indicates the Victorian Association of Forest Industries (VAFI) now supports relaxing certain aspects of the export restrictions," the briefing to former treasurer Michael O'Brien, said. "Such a change should lead to improved outcomes for both VicForests and industry. DTF supports the reconsideration of the timber export policy."

It follows the expiry of a clause that has for the past decade effectively allowed VicForests to legally operate against Commonwealth competition laws by favouring domestic over international wood processing.

It is unclear whether the Andrews government will re-instate the clause. In a written response to Parliament, Agriculture Minister Jaala Pulford last month said the situation was "under active consideration" by her department following the "sunset" of the clause on July 1. Her spokeswoman said the clause had been introduced in 2004 to help the industry transition to a fully competitive market system.

Ms Pulford later confirmed the requirement around domestic processing had been approved in 2014.

"I have asked my department to prepare advice on the appropriate mechanisms to formally require VicForests to explore all options for domestic processing before any straight export contracts are considered," Ms Pulford said.

The industry is viewing the expiry of the competition clause as an opportunity for new international markets. "This is about finding a market for residual timber that can't be processed domestically," VicForests spokesman David Walsh said.

Under the plan, higher grade saw-logs would continue to be processed locally, but lower grade timber would be shipped to countries such as China with the technology to use it to produce veneers and other products.

VicForests was under pressure even before the loss of the SEFE contract taking waste timber from VicForests' East Gippsland logging operations, with international markets increasingly demanding higher quality plantation timber.

A December 2013 report by the Victorian auditor-general found in 2012-13 at least 250,000 cubic metres of residual wood, representing 16 per cent of the total harvest, was left on the forest floor and burnt because no one wanted to buy it.

VicForests has also considered selling its residual timber as firewood, using it for power generation, or even producing chip-board.

MyEnvironment director Sarah Rees said the move represented a "race to the bottom". "Australia cannot legitimately compete with the price of wood coming out of Indonesia and Vietnam, so this is another desperate, loss-making venture to keep logging native forests, only now VicForests are compromising Australian jobs to keep it going."

"Clearly our view is if you want a successful forest industry you need more high value processing in this country," Mr O'Connor said.

VAFI chief executive Tim Johnston said the industry supported local processing although at times this was not possible.

"If exporting residual timber opens up new opportunities for the forest and wood products industry in Victoria and continues to support local businesses and jobs, then VAFI will support the move," Mr Johnston said.